Thoughts on the Importance of Prayer

We all 'know' that prayer is important. But it is so difficult to 'find time' to pray! We rush here, have to get that done, the phone is ringing, someone is at the door, the children are crying.... There is no end of other things that take precedence in our busy days.

Prayer becomes something that we do when time and life allow, something that we rush through so that we can get on with the chores and necessities of the day. It seems we have no choice but to live life in this way.

An Alternative Point of View

Last week (as of July, 2003), I attended Mass at the Trappist Abbey in Lafayette, Oregon. It is a small town of just a few hundred people, and about five miles off of the rural highway is the abbey and retreat center. The homily on this particular Sunday was one of the best I'd heard in years, not due to its dynamic delivery -- for the delivery was actually rather mundane -- but due to its content and relevance to the faithful and the present state of the Church, especially in America.

In addition to the homily and the usual reverence with which the Trappists celebrated the Mass, I became aware of the way in which they prayed. No hurry. It was as if this was in fact their purpose, and not something to race through so that they could get on to other important matters. It was almost humorous to hear the organist wrestling against the monks, always a couple notes ahead of them, urging them to hurry up!

Driving home I realized how my priorities are the exact opposite of theirs. Though I say I recognize the importance of prayer (and its deplorable lack in my own life), it is nonetheless something that in practice I do only when time and distractions allow. It is not the center around which my life revolves.

And this is wrong. But the truth is that I'm not sure how to 'fix it' in 'real life.' From the moment I wake to the time I go back to sleep there are calls to answer, bills to pay, family members to which to attend, fences to repair. My relationship with Christ, as it happens in prayer, takes a back seat. For the longest time I have attempted to justify and rationalize this by saying that each good action and day of work is, in a way, a prayer and act of worship. And there is an element of truth to this, but I know deep down that it was also an excuse for my own failure to spend private time with Jesus.

And so I am trying to make a change. It is a change that we encourage you to explore as well. Specifically, the change is that we are making prayer the center, the hinge, of our daily life and business. No longer will it be something that we rush through (if we even get to it) so that we can attend to other pressing matters. Rather, we will have set, concrete times of prayer and a private place in which to pray, at least every morning and evening. And we will rush through (or fail to complete) our other things so that we can maintain this. Granted, these times will and should be somewhat limited given the secular and family nature of our lives as laity, but from this point forward we are going to stop talking about how important prayer is and start doing it.

Because the distractions are so many and so difficult to avoid, we are creating a small room in our house just for prayer. No phone. No computers. No TV. No radio. No disturbing. Just some kneelers, chairs and religious icons.

We invite your thoughts, comments and prayers in this regard. We will keep you posted (here) as we proceed.

In July of 2004 we completed the altar table and stools desired for our small home chapel. The altar table is large enough for a 'family-size' Bible and a couple candles or small statues; perhaps a desktop crucifix. This one has a through-dovetail drawer to to hold seasonal holy items. 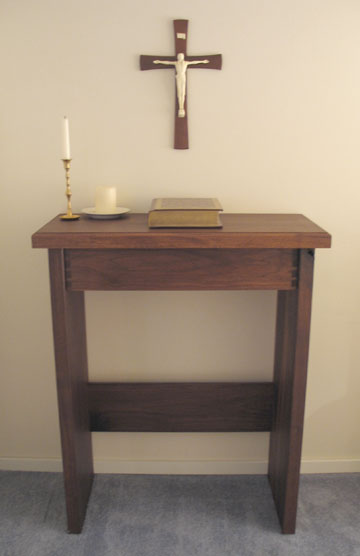 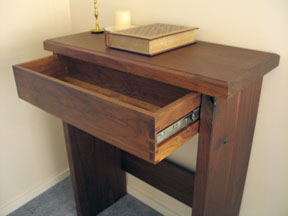 I just started using the room and it was wonderful. To have an out-of-the-way place without distraction to go for prayer is already assisting me.

The images, below, show the current, simple set up. The first image shows the walnut altar table, candles, Bible, crucifix and kneeler. Just out of sight behind the kneeler are some stools patterned after a traditional monastic design provided by a customer who requested three of them from us. 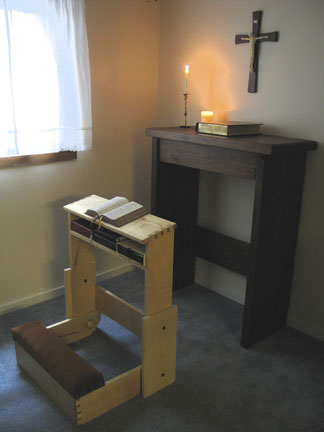 This image shows three of the four stools we have for small prayer groups. Notice how the altar is designed so that the kneeler tucks right into it. The room is pretty tight, so we wouldn't want to have more than 3-4 adults in at once. The stools are actually very appropriate for praying the Liturgy of the Hours, in which the postures alternate between standing and sitting. When praying alone I leave the prayer kneeler out and place a bench a couple feet behind it. I pray the Liturgy of the Hours standing and sitting. When finished, I have some kneeling prayer/contemplation time before Christ Crucified before heading off to work. 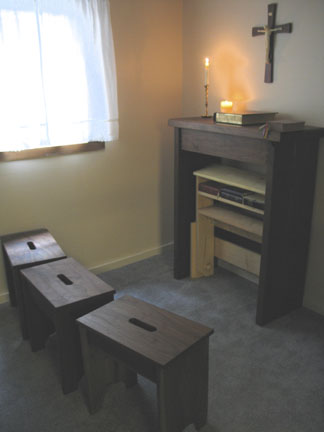 For anyone interested in creating your own prayer space: The total space needed for the altar, kneeler and bench is about 10 feet by 10 feet -- a very small room or part of a larger one. The altar we made is actually the second one. The first one was made from maple using the wood stock we use for the kneelers. But due to its height and overall size, the 3/4 boards were just not heavy and rigid enough in this design. So we rebuilt it with 2" thick walnut. The table weighs almost 100 pounds -- it is heavy-enough that I don't have to worry about it tipping, and it is structurally rock-solid, something that I will be able to hand down to my children and grandchildren. It is fairly tall -- when kneeling the Bible on the table is just below eye-level. Some have already suggested that we make a cabinet-style front for storing various holy items. Another person recommended removing the drawer to bring the top down about six inches for those who want a shorter altar. If you prefer to pray kneeling exclusively, then there is no need for a bench; alternatively, there is no need for the kneeler if you do not (or cannot) pray kneeling.

The story on the monastic bench is an interesting one. The customer, Sr. Theresa, ordered a prayer bench from us and later asked if we could make three monastic stools. As usual, I replied, 'sure... but what is it?' She sent us a rough drawing, and we took it from there. According to Sr. Theresa, stools of this design are (were) used in older orders where the monastics had few personal possessions. In practicing a simple life, the stool would be used as the primary furniture for almost all sitting. The handle in the top makes it easy to carry to a nearby room for use. Like the altar table, we made this set from walnut. They are surprisingly comfortable. 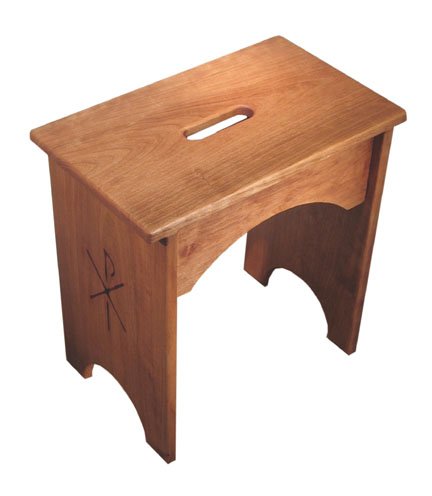 Prior to making the monastic stools, we 'pre-emptively' designed and made a stool from oak that has four boards instead of five in its design. I like angular, trapezoid designs, as they can provide incredible strength and stability yet remain visually attractive. (The handle-slot in this one is larger than normal.) 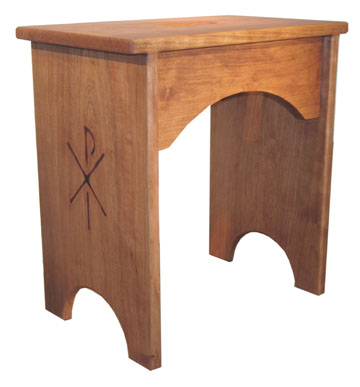 We plan to add a couple icon-images once we have enough funds to do so. For now, these elements combine to create a peaceful, quiet, prayerful place in our home and business. If you have a home chapel or have suggestions for ours, we would love to hear from you.

Effective November 2004: The simple truth is that no one needs a special altar or bench to pray, but some have asked if we could make these available to them, as well. Due to these requests we have added the monastic benches and small altar to our woodshop product list....